A REVIEW ON HOMOSEXUALISM

The greatest location in life is,the mind. Is it the case that the minds of these homosexuals have been attached to embracing this act? What is the pleasure in the same sex(male and male or female and female) engagement? How interesting is it to them? I hope their minds are still intact because they might have lost them. If not, they would not have thought of homosexuality in the prima facie. – – – Akinrulie opeyemi Joshua

If God supports homosexuality He would have informed mankind in a systematic way. Perhaps, some people have assumed that this act can’t be regarded as a bad concept since it’s not a religious matter. It is very essential to note that, religion rules the world whether you like it or not. But, let’s call our conscience and consciousness to be active in this matter, if an individual chooses to be gay or a lesbian,what must have led to this? This is not the time to perform a comic relief but it’s a time to scrutinize with conscientiousness because homosexuality has become a normalcy on our contemporary society.

What is the excuse? Is it the case that men are not sufficient? Or is it the case that women are not many? Well and truly, this is a simple analogy. If you think that homosexuality is right,it simply means your creator or maker made a mistake by giving you that GENDER. Hence, you wanted a male gender but He gave you a female gender. You wanted a female gender but He gave you a male gender. In other words, you decided to swap your gender because of the freewill you have. But, always remember that freewill is limited. Judgment has hidden herself because she wants to be unique when the time comes.

If you are male  and you act like a female, this doesn’t mean God made a mistake. If you are a female and you act like a male, God didn’t make a mistake. Your identity is not meant to be altered that is why it is called “Identity“. That is, something you can be identified as. If your identity changes,then something is wrong, one may be asked to explain the sudden transformation. Thus, your explanations will be accepted on a truthful ground which people will see that it is truly genuine. On the other hand, this won’t be permitted when you change your sexual orientation on the basis of homosexuality. To be gay or a lesbian is absolutely an abomination in this context.

How acceptable or palatable is it for Mr X to sleep with Mr Y? How pleasurable is it for Miss Y to sleep with Mr X? You can use positivity and negative to produce a well solidified accomplishment. Not positivity and positivity. Not negativity and negativity. What makes life unique is the positive and negative aspect. That is why man is always interested in getting things done at all cost which is in the paradigm of curiosity. What’s your opinion? Heterosexuality procreates while homosexuality can’t. That is, imagine homosexuality were to be the subject matter of mankind,how will you be in existence? 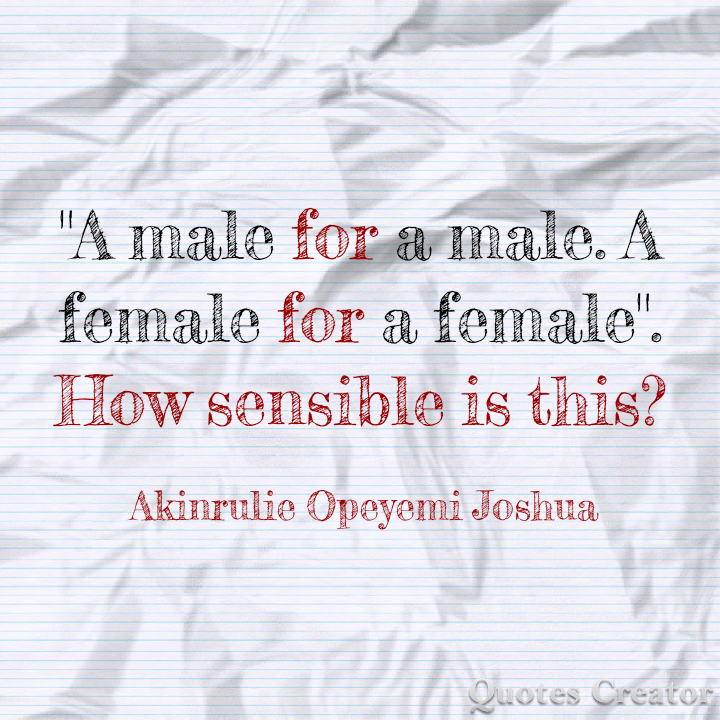 Are they not violating the law of God which says, “be fruitful and multiply”? Homosexuality is not productive yet,its influence is so high. If homosexuals can’t contribute positively to human society,then let abolition be permitted. But,this is not to say that,if homosexuals can procreate or contribute positively,then it’s right or good. What I am saying is that since it is against nature, why engaging in such an act? Let me put myself in this scenario for proper understanding :

” I am a male and it is expected of me to marry the opposite sex (female). Which I must, because it is part of the norms of nature. Now, if I choose to go contrary to the established uniformity of nature by sexually seducing the same sex,then I will be regarded as a bad and immoral ndividual.

In other words, the history of Sodom and Gomorrah should be a lesson for homosexuals yet,their adamant minds won’t let them think cleverly. If Sodom and Gomorrah saw this kind of opportunities in trying to correct people involving themselves in homosexuality may be, they would have been pardoned . This is the time of grace yet, you  are using it as if it won’t end. If the end is near, then grace is not for life.

Of what profit is homosexuality? What is this world turning into? Same sex marriage in the World God created. “God, I hope you are not angry”. Please kindly forgive us, remember all what you have done. I am not pleading on behalf of homosexuals. But, whether it is right or wrong I have nothing about it, this is just an illumination of change. I hope this will work.

This is just a short article created to speak to those practicing homosexuality. At the end, it won’t be the work of the devil. It will be only you.— Akinrulie opeyemi Joshua